Following our well-attended seminar in 2015 and 2017 we present a minifestival with lectures, discussions, film, research results, performance and mingle. All around and about age and stage.

12.00-12.30  Anders J. Larsson– Filmmaker premiering a new documentary: “Jag vill bara dansa”, where he followed 22 remarkable people between 68-85 rehearsing and creating STORIES and their feelings and reflections around their own body and mind in connection to dance.
It is a documentary movie about challenging oneself both body and mind, about passion and joy, pain and setbacks, but above all about what dancing can do to us humans. Talks with the performers.

12.30-12.50 Joce Giles will give us an insight to the Elixir Festival – this presentation will look at the Sadler’s Wells’ large-scale festival that celebrates lifelong creativity and highlights the value of mature artists. In his current role at Sadler’s Wells, Joce leads the Learning and Engagement department, which delivers a broad range of work for people of all ages and backgrounds in London and across England. Joce oversaw the Elixir Festival 2017, which included performances by over 300 professional and non-professional dancers as well workshops and a conference.

13.00-13.50 Christopher Roman– Ex director of The Forsythe Company and Dance On Ensemble will talk about responsibility! for our bodies, our collaborations, our field at large and how it is not enough to represent our art-form only onstage artistically but also politically, socially, administratively, philosophically, so that it does not become completely appropriated by others who, perhaps innocently, begin to describe or define an art-form they are not physically and creatively invested in.

14.00-14.10 Ninna Riddarström and Staffan Sörensson presenting the Age on Stage research website with Cecilia Ferm Almqvist and Ninnie Andersson, revealing their results and observations of workshops for people 65+.

Born on Nanny Goats Common, Dagenham, Essex, a post war baby, into a repressive era in the suburbs, where parents were truly in charge and children were seen and not heard, Liz Aggiss never had a clue who she was or what she wanted to do, she just knew she would like to be seen and heard. After cantering into the sunset, as soon as was decently possible, she accidentally stumbled into the arts and started moving in a mysterious manner and shouting………rather a lot.Liz Aggiss has been described as: maverick, challenging, anarchic, indomitable, dangerous, uncompromising, subversive, fearless, funny, powerfully disturbing yet vulnerable.Liz Aggiss simply says…..I am lizaggiss.

“Slap and Tickle is a pointed and bawdily funny exploration of what it means to refuse to act your age.” Lyn Gardner theguardian.com

A documentary about an extraordinary artist:

Charlotta Öfverholm. She is a rare force of nature, a woman who refuses to impose limits on herself or her art.

Charlotta Öfverholm’s entire adult life, as well as a large part of her childhood and early years, has been filled with dance and every- thing that comes in its train. She has worked as performer and choreographer with with some of the world’s most renowned artists, enthralling both them and her audience. She sees herself as continuously striving to achieve perfection; others see her as wild and beautiful, bizarre and intoxicating. A workaholic imbued with heart and unconquerable forcefulness, whose commanding scenic pres- ence is welcome in the US, France, the Czech- Republic, and Germany. And even in her home country Sweden, where she is sometimes perceived as something of a rare bird – as far from that country’s vaulted virtues of modera- tion and prudence as it is possible to get – she enjoys a devoted following.

She has run her own dance company, choreo- graphed countless dance scenes and been an inspired teacher. Her body is her closest friend. She has cared for it to the best of her ability but always challenged it to the limit. Although not immune to the wear and tear that full-time dancers unrelentingly subject themselves to

– at the age of 50 her hip joint is now made of titanium – her will of steel remains as unbend- ing as ever. Many of her peers gave up dancing a long time ago. But how can you stop doing something that is central to your very way of being?

For two years, filmmaker Anders J Larsson and his camera followed Charlotta Öfverholm. The result is an inspiring film about a woman and her raison d’être: dance.

Moderators: Ninna Riddarström & Staffan Sörenson will take us through the day. 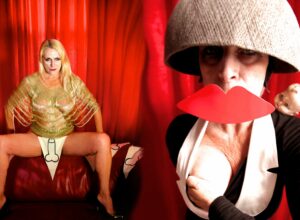 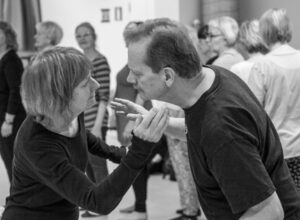 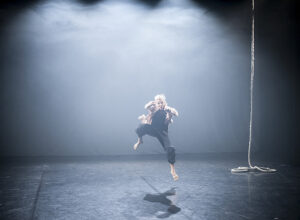 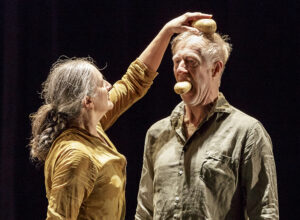 For the past 40 years Liz Aggiss has been re(de)fining her own brand of British contemporary dance performance, blurring the boundaries between high art and popular culture; from the early 80’s supporting punk legends The Stranglers with her visual cabaret troupe The Wild Wigglers: to her classic solo Grotesque.

Dancer: to the dance/opera duet Falling Apart at the Seams: to the award winning dance film Motion Control: to Guerrilla Dance interventions: to the unconventional Performance Lecture Survival Tactics: to her cross disciplinary performance The English Channel: to her current solo Slap and Tickle. She received the Bonnie Bird Choreography Award 1994, Arts Council Dance Fellowship 2003, is Emeritus Professor University of Brighton and received Honorary Doctorates from the Universities of Chichester and Gothenburg Sweden.

Joce trained at the Royal Ballet School before working as a dancer with the Peter Schaufuss Ballet in Denmark in 1997 and then Scottish Ballet in 1998. Joce left Scottish Ballet in 2004 and moved into arts management, taking up the role of Dance Development Officer at The Works; Dance and Theatre Cornwall.

Lead roles include Shakespeare’s Hamlet (Landestheatre Linz by Robert Poole), Alice in Alice in Wonderland (Stadttheater Giessen by Roberto Galvan), and Lola in Lola and Mr Talk at Divadlo Archa (by Jan Kodet) for which she was nominated a Thalia Prize at the National Theatre in Prague CZ 2005. She performed in musicals like Cabaret at the Royal Dramatic Theatre and Leva Livet at Chinateatern, Stockholm. Charlotta choreographs commissioned works for companies such as Norrdans/SW, Vertedance Prague/CZ, Ballet Linz/AU, Tanztheater Münster/DE, Folkoperan/SWE and Gothenburg Dance Company/SWE. She has choreographed films and documentaries for Swedish Television among them Holiday and Bortkopplad by Anna Duell and Gunstlingen by Astrid Ohlsén. Coordinates and programmes for Balettakademien’s International Summer festival since 2005. Created Fucking burn it – Age on Stage 2015, a big festival about age and dance. Seminars, performances, films, workshops with mature dancers from all over the world.

Christopher Roman began his formal training with The School of Cleveland Ballet, continuing at The School of American Ballet in New York City. He was invited into the ranks of the Pacific Northwest Ballet and danced as a soloist and principal with Edward Villella’s Miami City Ballet, Les Grands Ballets Canadiens in Montreal, The Pennsylvania Ballet, Ballett Frankfurt and The Forsythe Company.

In 2009 he received Germany’s highest theatre honour – Deutscher Theaterpreis DER FAUST – for best performance. He is the European MFA Study Curator and Co-ordinator for Hollins University in the US. From 2013 to 2015, Christopher was Associate Artistic Director of The Forsythe Company. He is a Trustee for the Forsythe Foundation.

CECILIA FERM-ALMQVIST Researcher, Luleå Tekniska Universitet
PhD Cecilia Ferm-Almquist is a Full Professor of music education at Luleå University of Technology Sweden, where she graduated in 2004 on a phenomenological thesis about teaching and learning interaction in music classrooms.

Her philosophical and empirical research focuses upon democracy and inclusion in diverse music educational settings, as for example music teacher education, assessment situations in the music classroom, and special educational contexts. Sha has presented her work internationally at several music educational conferences and in well-known scientific journals such as RSME, PMER, BJME, IJME, VRME, and Reconstruction.

NINNIE ANDERSSON Researcher, Luleå Tekniska Universitet
PhD Ninnie Andersson is an assistant professor in education at Luleå University of Technology Sweden, where she graduated in 2016 on a phenomenological thesis about assessment in dance education in upper secondary schools.

Ninnie has presented her work internationally at educational conferences focusing on dance as well as assessment. Beside her research she is a legitimized dance teacher with main focus in jazz dance. She has been certified in the Simonson technique by Linn Simonson and since 2013 she teaches the certification course of Simonson Method of Teacher Training.

Is a freelance filmmaker with focus on dance and stage productions both in Sweden and internationally. The collaboration with Charlotta Öfverholm started 2013, when he created video projections for a full evening choreography, 4 Feet Under, by Charlotta Öfverholm, for Tanztheater Münster, Germany. After this he and Charlotta has continued collaborating with both documentaries, films and projections for dance productions at Göteborgs Operan, Dansens Hus, Acusticum, Rival, Ponets in Prag, Kulturhuset Stockholm, among others. Anders has also produced several Dance films shown on festivals in Sweden and international festivals.He is also the founder of Stockholm Dance Film Festival. Anders is educated at New York Film Academy Berghs School of Communication in Stockholm where he now also gives courses in film for social media.

AGE ON STAGE, Past projects